A MUSE OF FIRE: Something Wicked This Way Comes – The Power of Villains 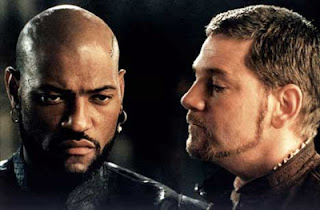 Thus do I ever make my fool my purse;
For I mine own gained knowledge should profane,
If I would time expend with such a snipe
But for my sport and profit. I hate the Moor,
And it is thought abroad that 'twixt my sheets
H'as done my office. I know not if't be true,
But I, for mere suspicion in that kind,
Will do, as if for surety. He holds me well;
The better shall my purpose work on him.
Cassio's a proper man. Let me see now:
To get his place, and to plume up my will
In double knavery. How? How? Let's see.
After some time, to abuse Othello's ears
That he is too familiar with his wife.
He hath a person and a smooth dispose
To be suspected--framed to make women false.
The Moor is of a free and open nature
That thinks men honest that but seem to be so;
And will as tenderly be led by th' nose
As asses are.
I have't! It is engendered! Hell and night
Must bring this monstrous birth to the world's light.

Where cerebral or martial, man or woman, William Shakespeare unleashed upon the world some of literatures most complex and chilling villains. As I discussed in my earlier column on crafting strong adversaries/antagonists, villains are a particular subset. An adversary of a different color if you will. An action of fate can be adverse to your hero, but the action is benign. A villain – black-hearted, black-souled, sociopathic, homicidal or psychopathic – acts out of personal motivation to damage, harm, kill, destroy.

Shakespeare’s villains may wound with a word or a sword. They may take action themselves or set in motion a deadly intrigue; and then sit back with a self-satisfied smirk as the blood flows.

Motivations vary, but to me the most dark and chilling villains are the ones not driven by flawed human frailties, by need, or greed, or hatred, but the ones driven by a Machiavellian need to destroy. Iago fits that bill and his cold calculation makes him a deadly adversary for Othello, whose fiery and impetuous, passionate personality serves Iago well. In the end, Othello’s beloved Desdemona is dead at his hand and he is crazed with the guilt of what he’s done.

The best villains are crafted with enough complexity to intrigue the reader, but to avoid caricature or stereotype. Surprise your reader: The baby-faced torturer, the suave serial killer, the grandmotherly ax murder. Likewise, their psychological makeup must be a canny blend of psychology and motivation. We must understand what drives them, what their triggers are (the better to create an atmosphere of suspense as we see them driven forward on their evil journey, just as we see our hero and heroine compelled on their heroic and romantic journey), what their motivations are, and what conflicts may thwart them.

The caliber of villain you craft will depend on your story. Do you want the blackest-hearted blackguard ever written – whose demise will leave your reader standing and cheering? Or a tortured soul for whom the reader may feel a bit of pity? Is your villain the MacBeth type, or the Iago type? The first driven by human emotion, the other enjoying the murderous outcome with cold satisfaction?

Also, what is the villain’s ROLE in your story? How is he to be the foil, the human embodiment of conflict, for your heroic pair? That question, too, will determine how you need to mold him or her with greatest effectiveness.

To help you craft these characters, you have a wonderful array of resources: Study contemporary villains – sadly, the news on any given day provides a despicable perp walk of villainous types, all of whose characters, backgrounds, motivations and actions are dissected in minute detail.

There are also innumerable non-fiction titles written about every high profile villain, from Jack the Ripper to Charlie Starkweather to Bernie Madoff. Written by forensic specialists, law enforcement, psychiatric professionals and reporters.

There are, too, countless research titles available. You can research abnormal psychology and crime scene investigations. Types of killing and murder, and overviews of demographics of who murders who, how and why (One reason why the Aileen Wournos case was so sensational? Women were not expected to be serial killers, and when the “black widow” murderess invariably showed up, they used not guns or weapons of overt violence, but the “kinder, gentler” weapon of poison.)

Once you have chosen your villain, read enough to understand the psychology so you can create an intense villain, with layers of human complexity. Set up the character biography so you are clear on what has set them on this path, what their motivation is; what they seek to gain by committing their criminal act, and how they feel in the aftermath. And do enough forensic research that the acts they commit ring true and your reader will shiver at the thought of being prey to the heinous character. Of course, read the best in the genre to see how other capable authors handle these subjects.

As always, there are legions of films and television shows with great evil doers to study. And likewise, in dramatic literature, there are some great villains: Ms. Venable in “Suddenly Last Summer” is a chilling character who’d give Iago a run for his money. Regina, in Lillian Hellman’s “Little Foxes”, Mme de Merteuil in "Les Liaisons Dangereuses" by Christopher Hampton, and of course Sondheim’s bloody “demon barber of Fleet Street”, Sweeney Todd in the play of the same name.

In point of fact, there is no end to the number of dastardly types you can study in order to give your readers the fright of their life: The fear that the hero and heroine may succumb to the marvelously complex and dangerous villain in their midst.

“Do it not with poison, strangle her in her bed, even
the bed she hath contaminated.”

Posted by lisekimhorton at 3:51 PM No comments: