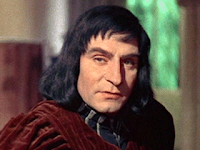 “I am determined to prove a villain … plots have I laid, inductions dangerous…So speaks Richard III, one of Shakespeare’s, and dramatic literatures – most villains characters. He is the Rambo of antagonists, and a perfect example of the value of crafting a strong adversary to ensure powerful conflict and a titanic battle for your heroic protagonists.

Richard’s villainy consumes the play and his plotting touches everyone in his sphere, and some, like Anne, who’d prefer to be as far removed from his sphere as possible – a vain hope unfortunately. Yet in true romance style, Richard (though he’s Shakespeare’s protagonist in the play) gets his fated comeuppance – in addition to the various human adversaries, he is ultimately brought low by that classical antagonist: Fate – “A horse! A horse! My kingdom for a horse!

Creating strong, powerful, cunning, dastardly villains or antagonists is a must in romance. Whether in a romantic suspense where the adversary is a real villain with homicide on his mind, stalking the heroine, whom she and her hero must best in bloody, mortal combat, or a fantasy wherein the lovers are up against the power and weight of magical plotting by denizens of a rival kingdom, or a contemporary category story with a hostile takeover adversary who must be bested in the boardroom, the strength of your novel’s villain determines in the large measure the intensity, and strength, of your conflict. Which leads to a riveting story readers cannot put down.

Shakespeare has peopled his pantheon with villainous characters of every stripe: Richard III, Iago, Lady MacBeth and the Mr., Shylock, Brutus, Gertrude and Claudius, Goneril and Regan, and “Measure for Measure’s” Angelo. Men, women, Mother Nature makes an appearance on several occasions (“The Tempest”, “King Lear”) and as is evidenced in “Richard III”, even Fate plays a major adversarial role. These characters present a master class in the crafting of that dark force you must set against your heroic tag team. And further, they provide great examples of classic motivations: Lust for power, greed, jealousy, revenge, lust and that pure Machiavellian sociopathic drive that is such fun. Iago is a wonderfully sinister example as he drives Othello to murder. While Othello commits the crime in a jealous rage, it is the cold calculation of Iago as he plants the insidious seeds that is really chilling.

Lady MacBeth is a mere manipulator by comparison, but while she admonishes her husband to “Screw your courage to the sticking place and we’ll not fail!”, once he has carried out their plan, her resolve disintegrates into madness over the deeds. It is a great example of macabre hand-wringing perfection as she bemoans, “Out, damned spot! Out I say!”.

A more benign villainy is that perpetrated by Lear’s daughters, Regan and Goneril – though in our story, Cordelia would naturally emerge victorious in that sibling grudge match.

Even the whimsical Puck plays the antagonist as he sets humans and gods on a merry love chase in “A Midsummer Night’s Dream”.

Henry VI, as in many an historical romance or sci-fi opera, is up against an entire kingdom, which challenges rouses Shakespeare’s royal hero to towering, heroic heights:

Once more unto the breach, dear friends, once more;
Or close the wall up with our English dead.
In peace there's nothing so becomes a man
As modest stillness and humility:
But when the blast of war blows in our ears,
Then imitate the action of the tiger;
Stiffen the sinews, summon up the blood,
Disguise fair nature with hard-favour'd rage;
Then lend the eye a terrible aspect;
Let pry through the portage of the head
Like the brass cannon; let the brow o'erwhelm it
As fearfully as doth a galled rock
O'erhang and jutty his confounded base,
Swill'd with the wild and wasteful ocean.
Now set the teeth and stretch the nostril wide,
Hold hard the breath and bend up every spirit
To his full height. On, on, you noblest English.
Whose blood is fet from fathers of war-proof!

I see you stand like greyhounds in the slips,
Straining upon the start. The game's afoot:
Follow your spirit, and upon this charge
Cry 'God for Harry, England, and Saint George!'

Set it anywhere you like, that is major conflict and sets the stage for wonderful acts of courage on the part of your hero!

The canon of the Bard on Avon is a go-to-guide for villainy and conflict. Hannibal Lecter is no match for the “crook backed” King Richard himself. So get thee to a library (or B&N or Amazon) and grab a play, any play, and start plotting your OWN dangerous inductions!

If you’d like to take a gander at a broader spectrum of bad guys, there are any number of plays with terrific adversaries throughout drama. The threat of Nazi’s is the crux of Lillian Hellman’s “Watch on the Rhine”, and in her “Children’s Hour, it is a cold and cruel society set against the two young teachers. A town willing to go to extreme lengths figures in Friedrich Durrenmatt’s “The Visit” as well, and again in Tennessee Williams “Sweet Bird of Youth”, as they castrate the anti-hero, Chance Wayne. Judge and jury square off in Ayn Rand’s “Night of January 16”. Ibsen’s Hedda Gabler is a great manipulator. It is the hand of fate, however, who hovers over some tragic folk – Willie Loman in Arthur Miller’s “Death of a Salesman” and Lola and Doc Delaney in Inge’s “Come Back, Little Sheba”. Williams has a great hand at the macabre too, with the driven villainy of Mrs. Venable – who out-villains even the carnivorous pre-teen cannibals in “Suddenly, Last Summer”. Familial adversaries abound, as well, from the classic “Antigone” and “Oedipus”, to O’Neill’s “Strange Interlude” and “Desire Under the Elms”. The classic canon gives us infanticide and that complex murdering mom, Medea. Family dynamics, coupled with addiction and madness drive the characters in O’Neill’s masterpiece, “Long Day’s Journey into Night”. Add: Amadeus, The Petrified Forest, and Glengarry Glen Ross and you’ve made a good start.

Now create villains that make your readers root for your lovers – even as they fear the worst!
Posted by Lise at 1:54 PM No comments: